We have already learned how to execute a particular command block more than once by using a for loop. In the previous chapter we reviewed several other loop constructions, which could help us solve more complex problems:

Write a program that enters two integers n and l and generates, in alphabetical order, all possible "stupid” passwords" that consist of the following 5 characters:

The input is read from the console and consists of two integers: n and l within the range [1 … 9], each on a single line.

Print on the console all "stupid" passwords in alphabetical order, separated by space.

We can split the solution into three parts:

To read the input we will declare two integer variables int: n and l.

Let's declare and initialize the variables, which will store the characters of the password: for the numeric characters - int - d1, d2, d3, and for the letters - char - l1, l2.

We have to create five nested for loops, one for each variable. To ensure that the last digit d3 is greater than the first two, we will use the built-in function Math.max(…).

Write a program that reads a magic integer number and generates all possible 6-digit numbers, for which the product of their digits is equal to the magic number.

Print on the console all magic numbers, separated by space.

The solution of the magic numbers problem follows the same principle (again we have to generate all combinations for several elements). Try to solve the problem yourself by following these steps. 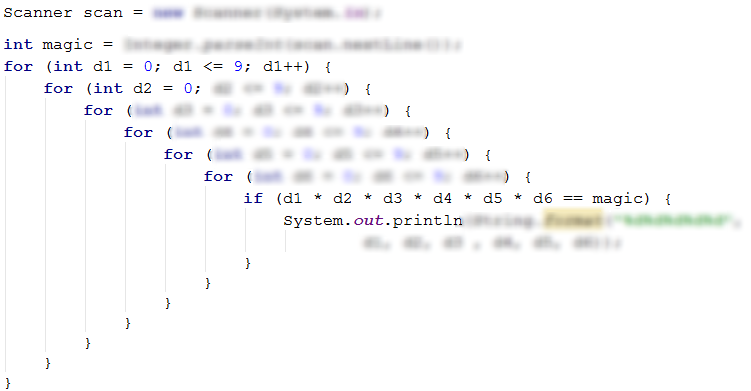 In the previous chapter, we reviewed other loop constructions. Let's check a sample solution of the same problem, where we use a while cycle. First, we have to store the entered magic number in a suitable variable. After that, we initialize 6 variables - one for each of the six digits of the numbers we have to output as a result.

After that, we start constructing the while loops. 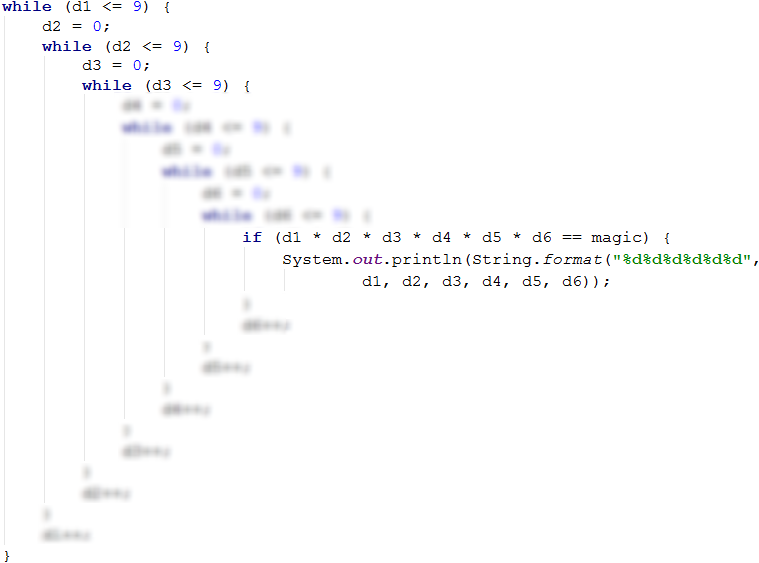 Let's remove the if check from the innermost loop. Now, let's initialize each variable outside the loops and delete the lines dx = 0. After we start the program, we get only 10 results. Why? And what if we use a do-while loop? In our case this loop doesn't seem suitable, does it? Think about why. Of course, you can also solve the problem by using an endless loop. 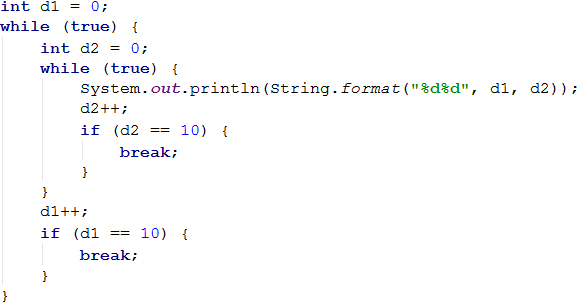 As we can see, we can solve the same problem by using different types of loops. Of course, there is a most suitable choice for each problem. To practice each type of loop, try to solve each of the following problems by using every type of loop we've learned so far.

Write a program that prints on the console all numbers from N to M that are divisible by 2 and 3 without remainder, in reversed order. We will read from the console one additional "stop" number S. If any of the numbers divisible by 2 and 3 is equal to the stop number, it should not be printed and the program should end. Otherwise, print all numbers up to N that meet the condition.

Read from the console 3 numbers, each on a single line:

Print on the console, on a single line, all numbers that meet the condition, separated by space.

The problem can be divided into four logical parts:

The first part is easy - we read three integer numbers from the console, so we use int.

We're also familiar with the second part - the initialization of a for loop. There's a little catch here - the problem requires us to print the numbers in reversed order. This means that the initial value of the variable i will be the greater number, and from the examples, we can see that this is M. Thus, the final value of i should be N. The fact that we will print the results in reversed order and the values of i suggest that the step will decrease i by 1.

After we have initialized the for loop, it is time for the third part of the problem - to check the condition if the given number is divisible by both 2 and 3 without remainder. We will do this by using one simple if condition, that we will let the reader construct.

The other tricky part in this problem is that, apart from the check above, we need an additional one - if the number is equal to the "stop" number entered from the console on the third line. To reach this check, the number we're checking has to pass the check above. That's why we add one more if statement nested in the previous one. If the condition is true, we have to stop printing. We can achieve this with the break operator which will lead us out of the for loop.

Accordingly, if the condition that checks whether the number is equal to the "stop" number returns false, our program should continue printing. This covers the fourth and last part of our program.

Write a program that reads an integer N and generates all possible "special" numbers from 1111 to 9999. To be considered "special", a number must satisfy the following condition:

Print on the console all special numbers, separated by space.

Solve the problem on your own using what you have learned from the previous two problems. Keep in mind the difference between operators for integer division ( / ) and division with remainder ( % ) in Java.

Write a program that reads from the console 1 integer within the range [100 … 999], and then prints it a predefined number of times — modifying it before each print, as follows:

Print on the console N lines, each containing M numbers that are the result of the actions above, where:

Print on the console all integers that are the result of the calculations above in the respective number of rows and columns as in the examples.

Solve the problem on your own, using what you have learned from the previous ones. Remember that you have to define a separate variable for each digit of the input number.